YOUR CLIMATE DOLLARS IN A SUSPECT MARKETPLACE

In the past couple of years there has been a major upsurge of interest and concern with Australia’s policies on climate and the attitude of the government towards climate change.

A case in point is the carbon credits market where organisations emitting greenhouse gases can offset those emissions by purchasing carbon credits. A carbon credit can be made up from any process that reduces, avoids, destroys or captures greenhouse gas emissions. More often than not, carbon credits are generated by agricultural and forestry projects, but also by the establishment of projects such as clean energy projects. For the record, one tonne of carbon reduction equals one carbon credit.

In a market with fewer carbon credits available, the price of those credits will rise and thereby encourage the greenhouse gas emitters to start looking at cleaner ways to do business just to save money. In a market flooded with carbon credits, the price drops and current and future emitters can buy cheap carbon credits to either offset their pollution, sit on those credits for future use or to re-sell if the market rises. So, the problem becomes one of supply and demand.

Carbon credits are most often created through agricultural or forestry practices, although a credit can be made by nearly any project that reduces, avoids, destroys or captures emissions. Individuals or companies looking to offset their own greenhouse gas emissions can buy those credits through a middleman or those directly capturing the carbon. In the case of a farmer that plants trees, the landowner gets money; the corporation pays to offset their emissions; and the middleman, if there is one, can earn a profit along the way. 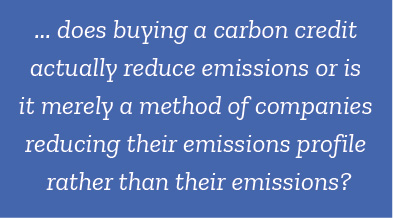 If an oil company, for example, goes over the prescribed emissions limit, it must buy or use saved credits to stay under the emissions cap. If a company stays under that cap, that company can save or sell those credits.

Australian Carbon Credit Units (ACCUs) are administered by the Clean Energy Regulator. The Regulator is in a position to reduce or increase the supply of carbon credits available to the market, and one would surmise with the serious issues presented by global warming that the availability of carbon credits would always be for the benefit of increased emissions reduction, regardless of the economic conditions and the political climate.

For any type of market that is concerned with climate to work there should be complete and absolute oversight by and independent bipartisan body that is not the subject of fear or favour – with the idea of this market being a huge dividends to the stakeholders who are you, me and the rest of the world’s population , not monetary profit. Putting governments and business in charge will at the very least attract negative speculation about motives and moreover, encourage some profit makers to do the wrong thing, as in most markets.

The tone of this essay should not be taken as anti-profit or anti-economy, however there has to be some rationale involved when we talk about climate change, economy and profit at the same time. The climate situation is serious and unless we properly address it, will become critical in a short time. Carbon credits can be looked on as a method to offset emissions, but in the whole scheme does buying a carbon credit actually reduce emissions or is it merely a method of companies reducing their emissions profile rather than their emissions? Should organisations that have played a significant role in creating the climate problem now profit from attempts to fix the problem? Should government finance (taxpayer funds) in the form of subsidies and grants be available to those same organisations?

The ERF has recently been the subject of adverse criticism when research carried out by the Australian Conservation Foundation and the Australia Institute indicated that one in five carbon credits issued by the ERF do not represent real abatement and are essentially ‘junk’ credits.

This 20% of supposedly ‘junk’ credits are for ACCU’s issued for what is called ‘avoided deforestation’ or for credits issued to stakeholders who nominated vegetation that was never going to be cleared – that’s like paying non-smokers to quit smoking! (ACF Paper by Grant King 2-Sep-21)

The issue of carbon credit allocation in Australia is just one area in the climate melting pot that needs more regulation. Questions should be asked about the ability and willingness of this Federal Government, and in fact any Federal Government under the current system, to act objectively and with integrity on climate matters. Too often we are left with the feeling that the people are not the main stakeholders in our elected government, and this is wrong.

This government departments concerned with climate, environment, industry, mining and the economy, have been operating in a ‘paternal’ fashion with a ‘we know what’s right for you’ attitude that is not at all transparent and in need of eternal and independent vigilance. Morrison and other ministers say exactly what they know the majority of people want to hear far too often, while behind closed doors the Coalition appears to be working in a different direction.