There is a dilemma happening between the rate of reduction in fossil fuel use, greenhouse gas emissions and the deleterious effect it might have on economic activity.

The reduction of carbon dioxide (CO₂) and other greenhouse gas emissions in the atmosphere has been the most widely recognised method of arresting global warming since the 1970’s. Carbon is a major component of the greenhouse gas recipe and makes up part the earth’s atmosphere  – it is also an intricate part of the photosynthesis and transpiration process as CO₂,  governing the earth climate. For life on earth, carbon is an essential component, but not in the massive quantities that are present today.

Today, CO₂ levels are higher than at any point in the past 800,000 years. In fact, the last time the atmospheric CO₂ amounts were this high was more than 3 million years ago, during the Mid-Pliocene Warm Period, when temperature was 2°–3°C (3.6°–5.4°F) higher than during the pre-industrial era, and sea level was 15–25 meters (50–80 feet) higher than today. (Rebecca Lindsey – Climate.gov)

The exploitation and burning of fossil fuels and land clearing has resulted in huge increases in atmospheric and oceanic CO₂ , infinitely more than plant photosynthesis or bio-sequestration can possibly remove. If we were to stop adding extra CO₂ to the atmosphere today, it would still take centuries for bio systems such as photosynthesis to bring the CO₂ levels back to the pre-industrial average levels. Unfortunately, we don’t have centuries to wait, even if we were to stop adding CO₂ to the atmosphere, which, after COP26 doesn’t seem very likely for at least the foreseeable future.

While the reduction of greenhouse gases is absolutely necessary and valid, there needs be more done to help arrest and reverse global warming

Walter Jehne is an internationally recognised climate scientist, soil microbiologist and innovation strategist and has worked as a scientist at CSIRO, the UN and more recently with NGO’s. Walter Jehne would like us to take more interest in soils and the dynamics of hydrology on climate to find the remedy to global warming. What he says makes good sense. [A shorter 20 minute version of Walter Jehne’s introduction to earth hydrology is here]

In one or two of Jehne’s presentations I’ve watched, he discusses the very serious climate predicament we are facing, but, he does manage to start on a reasonably positive note regarding solar radiation and the effect on global warming. Incoming solar radiation to the earth is at a rate of 342 watts per square metre. In order to have temperature and climate stability the outgoing radiation should also be 342 watts per square metre. 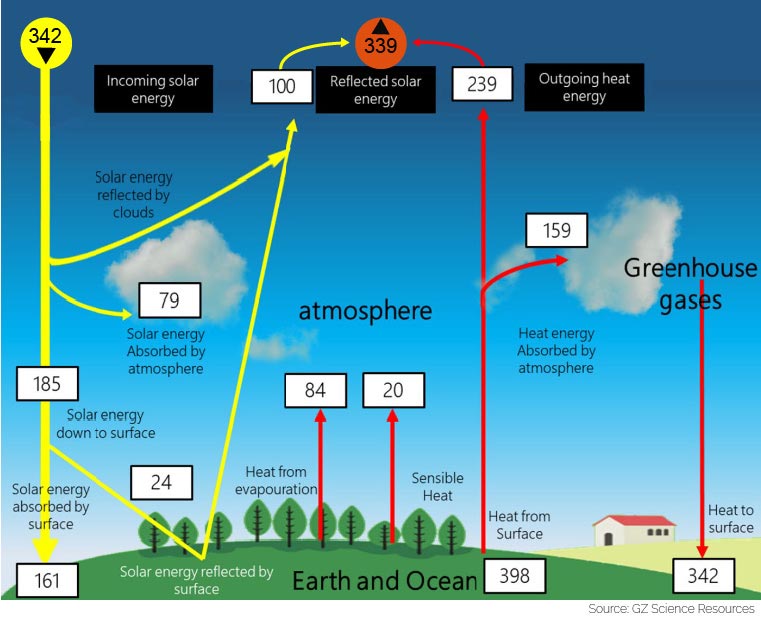 However the outgoing radiation is 3 watts short, at 339 watts – or as Walter says only 1% short!

So all that needs to happen is an increase of outgoing radiation by 1% and we have stability. The earth is no longer capable of regulating the system because the system is clogged with human-made greenhouse gases. As written earlier, greenhouse gas reductions at the best possible rates will not do the job needed in the time we have left, so we must adopt different strategies to run alongside carbon emissions reduction to start cooling the earth.

Walter Jehne is one of a number of respected and influential scientists advocating the study of the earth’s hydrology so with a greater understanding we can assist the earth, or nature if you like, to cool the place down.

The hydrology of earth is complicated and extremely varied from region to region, unlike CO₂,  hydrology cannot be easily modelled nor easily explained. The climate extremes that are becoming more frequent on our planet are caused by the hydrological climate extremes – bushfires, floods, storms, catastrophic and numerous cyclones, hurricanes or typhoons and resulting eradication of species. These are all signs of a bio system under pressure and in danger of collapse.

“There are only nine meals between mankind and anarchy”

In 1906, Alfred Henry Lewis stated, “There are only nine meals between mankind and anarchy”. A breakdown of the agriculture system would first lead to economic and social hardship, followed by instability then chaos. Restoring the earth’s hydrology to cool the earth will prevent that happening.

The consequences of hydrology are not as easily ascertained as those of CO₂. However Walter Jehne says there are definite biological or natural processes to regulate heating and cooling of the planet to restore the hydrology balance.

There is only about 50% of the vegetation on the earth’s surface as there was 10,000 years ago. Through transpiration, however, even that 50% residual vegetation is responsible for 25% of the radiation transfer. As little as a 4% increase in vegetation cover would cancel that 1% deficit in outgoing radiation.

A second process involves reducing the pollutants and dust in the vapour that has transpired from the vegetation and transferred to the atmosphere. The pollutants and dust in the vapour form a haze that absorbs up to 20% of incoming radiation and causes warming. The hazes are removed by coalescing of the micro droplets in the haze to form larger cloud droplets and eventually dense Albedo clouds that have the opposite effect on radiation by reflecting it back into space, thus creating a cooling effect.

One could say that if one element in the complex hydrology sequence is the most important, it is soil and land management. The radiation from the earth’s surface depends on whether the surface is covered or not. Regions with arid soil cover or no soil can reach temperatures of 70֯C and have massively more heat radiation than covered surfaces. Re-radiation is a main factor in the greenhouse effect, the cooler the surface, the less the greenhouse effect.

Rainfall is a large part of the cooling transpiration cycle. Raindrops are formed in clouds by the facilitation of precipitation nuclei, being ice crystals, sodium chloride from evaporated sea water, and bacteria that has transpired from forests. As the haze nuclei and cloud nuclei coalesce rain drops form and when heavy enough fall to earth.

The retention of water in the soil for longer periods is a critical factor in assisting photosynthesis to put carbon into the soil. The longer the water is in the soil, the longer that soil can support growth. The green biomass that grows is extremely useful when it is biologically converted into stable soil carbon.

Also, it’s important to note that:

Our biological ecosystem is an inseparable, physiological, cycling, complex dynamic. We need it to CYCLE … effectively.

Industrial agriculture today practices too much burning and clearing of biomass, which puts the carbon back into the atmosphere as CO₂. These practices along with the use of biocides, too much fertiliser and over-fallowing degrade the soil and even converts existing heritage carbon in the soil to atmospheric CO₂.

Every gram of carbon put into the soil results in:

Since the 1970’s the climate discussion has been framed around greenhouse gas, and more specifically CO₂, emissions and their reduction There are large amounts of money, both public and private, being spent and planning to be spent on greenhouse gas emissions reduction research and technology, which will certainly benefit the planet, however, the focus should be much broader and include viable biotechnology that can help cool the planet because more holistic climate science signals that reducing emissions will not be enough to keep the earth temperature rise at or below 1.5֯ C

hydrology and the soil sponge
rockflatblog