WHAT’S POLITICS GOT TO DO WITH CLIMATE CHANGE? 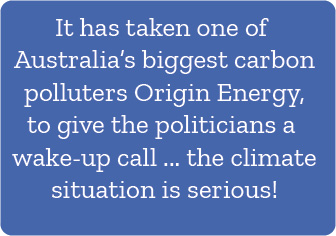 It took a power company, Origin Energy, and the announcement of the closure of the Eraring Power Station to get the climate issue back where it should be in the coming election campaign – absolutely front and centre.

Morrison has a blatant determination to have just about anything on the election policy platform except those things that really do matter – climate change and global cooling, a Federal integrity authority, and a multitude of gender issues. To say Morrison is not good at these critical issues is an understatement – he is hopeless to the extent of being negligent. Morrison has shown us what to expect for the next 90 or so days – unreal threats from China, and a perception that a nationalistic war between Russia and Ukraine is of vital importance to Australia and no doubt anything else that pops into his head as a thought bubble that may distract voters from the real issues. Morrison cannot use the economy against Labor as he may have wished as his government handled things so badly during COVID compared to the efficiency of the Rudd Labor governments’ handling of the last economic crisis in Australia.

At a recent liberal party room meeting Morrison boasted to the room that he was the one who would win them the election. The fact that he had to say this was evidence enough that Morrison was feeling pressure from his own party because of his poor performance, his terrible judgement and his lies. Later on that same day, five liberals members crossed the floor to vote against Morrison’s much touted religious discrimination bill – so much for the authority of and respect for Morrison in the party! 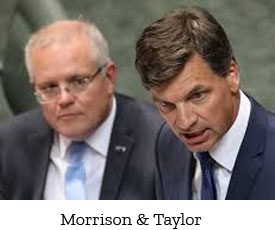 Morrison has been missing in action on the energy front since before the last election. Morrison pays lip service to renewable energy policy and that’s it, nothing has happened nor will it as long as this climate vandal has any authority. Morrison’s chief climate lieutenant is Taylor, the Minister for Energy and Emissions Reduction. Taylor’s recalcitrant attitude towards global warming and serious involvement in renewable energy is a joke. As a Minister of the government holding a key portfolio he was not informed by Origin Energy of their intention to close Eraring – he found out about the same time as you and I! In the meantime, Taylor is more than happy to hand out subsidies and grants to fossil fuel companies – many of which are not even Australian – to do goodness knows what research into so-called emission reduction

technologies. Taylor has been an ardent supporter – both morally and financially – of Chevron Oil’s Gorgon carbon capture and storage facility in Western Australia. Note that the Chevron process is artificial capture and storage and has nothing to do with the very effective natural bio process, and despite having many millions of dollars sunk into it has been a complete failure. Taylor hasn’t got bad judgement, he has no judgement and should be sacked immediately, he has become irrelevant. He should be made to give some answers to some of the shady areas of interest he has been involved in such as water buy-backs and protected grassland destruction.

WHY IS THIS IMPORTANT, AND WHAT’S IT GOT TO DO WITH CLIMATE CHANGE ANYWAY?

It’s about time that both Morrison and Albanese started acknowledging that halting global warming is going to be difficult and it’s going to be expensive. Over time it will more than likely mean that all Australians have to take a cut in living standard – a small price compared to how much many millions of people will suffer starvation, thirst and heat in marginally biodiverse areas of the world. Australia has the added responsibility of exporting fossil fuels that will add to global warming when used by the countries buying the material – because it is no longer on our shores does not mean it won’t affect us!

Morrison and Taylor have done absolutely nothing to advance transition plans to renewable energy – it’s as if they are amongst the last people on earth to realise that fossil fuels must go and will go. Theirs has been a total failure of good energy policy, which Australians will be paying for well into the future. We’ve missed the boat on many opportunities to be at the forefront of new and successful renewable energy solutions. Why has industry acted decisively to step away from fossil fuels while Morrison and Taylor are still promoting coal, oil and gas companies, which in most cases are not Australian, and seldom pay more than a few cents in the dollar in royalties and taxes for the incredible wealth they dig up and suck out of Australia. We need strong, resolute leadership focused on bringing Australia into line with other countries that are doing so much to try to cool the planet. And that’s something we certainly don’t have at this time!

the politics of climate change